On late Saturday night, Khan had tweeted, appealing his fans to stand in support of Sushant Singh Rajput’s fans. 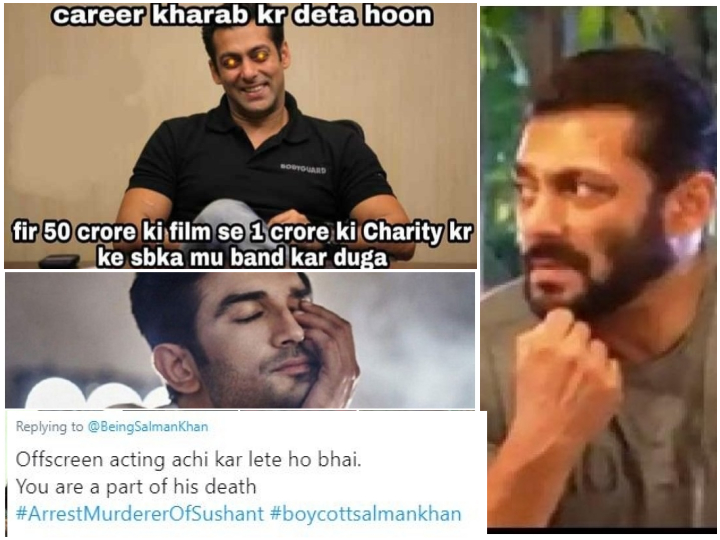 Ever since the demise of young and promising actor, Sushant Singh Rajput, several hashtags such as #BoycottSalmanKhan, JusticeForSushantSinghRajput, #BoycottStarKids and #BoycottBollywood began to trend on Twitter. Many people have alleged that the late actor was being discriminated against in the film industry as he was an outsider and not a “star kid” like Salman Khan or Karan Johar.

And amid a raging social media outrage on nepotism and favouritism, Bollywood superstar Salman Khan is once again at the receiving end, this time his ‘request’ tweet in wake of Sushant Singh Rajput’s death didn’t go well with netizens on social media.

However, Khan’s tweet, didn’t really go well with the twitterati who called out the ‘Dabangg’ star.

Many angry users, lashed out at Salman Khan saying that ‘ he’s only acting’ and trolled the Bollywood superstar demanding justice for Sushant Singh Rajput.

Check out some of the angry tweets of netizens lashing out at Salman Khan below:

I used to love you. But not any more. Sushant was a talented guy but you have always given chances to bad guys like Sooraj pancholi. Remember salman ,sushant will always be in our hearts.Boycotting you is trending at no. 5 and we will not watch your films pic.twitter.com/JWlNI9iGMF

@BeingSalmanKhan I use to be big fan of yours but you don’t deserve this. Karma is waiting for you

A request to all my fans to stand with sushant’s fans n not to go by the language n the curses used but to go with the emotion behind it. Pls support n stand by his family n fans as the loss of a loved one is extremely painful.

Bhai entire life and career is surrounding between controversy. Here are the list of some famous good work done by Bhai

Micro-blogging site Twitter is on fire with the on-going debate about nepotism and unfair practices in the film industry by the so called mafias, after actor Sushant Singh Rajput passed away a week ago on June 14, Sunday.

The 34-year-old actor was found hanging at his Bandra residence, he was reportedly suffering from depression.