New Delhi: TV actress Sonalika Joshi, who is fondly known for playing the role of Madhavi Bhide in Sony SAB’s ‘Taarak Mehta Ka Ooltah Chashmah’, is on cloud nine. Her daughter has scored 93 percent in her class 12 board exams. The talented actress took to social media to inform her fans that her daughter has passed with flying colours.

PICS: When Sonalika Joshi Turned VAMP For Her Photo-shoot

Sonalika shared a picture with her daughter along with the caption, “PROUD PROUD PROUD TO BE HER MOTHER…12th result…….KP IT UP Gundababu..God bless you.”

Fans have flooded the comments section with their congratulatory messages. Check out her post!

Palak Sidhwani, who plays Sonalika’s on-screen daughter Sonu in ‘TMKOC’, dropped a comment on the post. She wrote, “Wahhhhh, congratulations.” 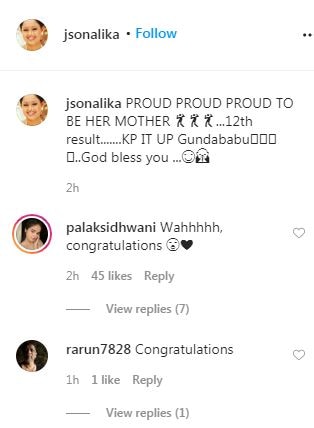 The makers of the ‘Taarak Mehta Ka Ooltah Chashmah’ have resumed shooting for the show. The production use is taking all precautionary measures to ensure the safety of cast and crew. Ardent fans of the show are quite excited to see their favourite characters back on the TV screens. The new episodes of the popular sitcom will air from July 22.

Sonalika shared a picture from the make-up room on social media. The actors of the show are also pumped as they are shooting after three months of lockdown.

Anushka Sen, who played the titular role in Colors TV’s ‘Jhansi Ki Rani’, has also scored quite well in her board exams. Despite her hectic shooting schedule, the actress managed to score 89.4 percent.

Watch this space for more updates!

Television actor, Anupam Shyam is admitted in the hospital in a very critical condition. Anupam Shyam gained a lot of popularity by playing the negative role of Sajjan Singh in the popular serial ‘Man Ki Awaaz Pratigya’ on Star Plus. Stay tuned for the latest updates. . Source link