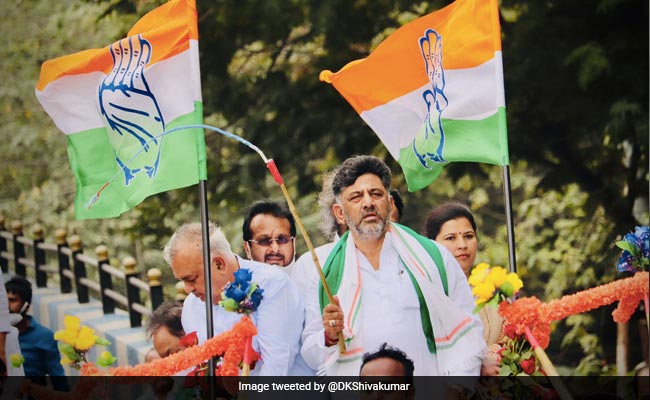 Leader of Opposition in the Karnataka Assembly Siddaramaiah, state PCC president DK Shivakumar and some Congress leaders on Monday arrived at Vidhana Soudha in a bullock cart, to attend the monsoon session of the state legislature, in protest against the rise in prices of essential commodities and fuel.

Faced by the bullock cart protest on the first day of his government’s first session after assuming office, Chief Minister Basavaraj Bommai hit back at the Congress party, accusing it of doing nothing on the issue of price rise, especially fuel prices, when the UPA was in power.

Marched towards the Vidhana Soudha alongside CLP leader Sri @Siddaramaiah and LoP- Legislative Council Sri @SRPatilBagalkot and other Congress leaders, on a bullock cart to protest against the govt’s consistent price hikes and failing standards of law and order in the state. pic.twitter.com/u33JbBscQ2

Earlier in the day, Siddaramaiah and Mr Shivakumar, accompanied by G Parameshwara, MB Patil, SR Patil, Eshwar Khandre and other Congress legislators rode a bullock cart to Vidhana Soudha, the seat of state legislature and secretariat here from their residence.

Accusing the central government of simply lying and cheating people, Siddaramaiah said life has become difficult with prices of essential items going up, and the Congress will continue its protest against the state and Centre on the issue, both inside and outside the assembly.

“They blame international prices for the fuel price rise. The price of a crude oil barrel is down to USD 69 from USD 120. Still, a litre of petrol is Rs 106 and diesel will soon touch Rs 100,” he said.

Contending the argument on debt position, he said, “They (BJP) say the previous government had borrowed huge loans. The loans amounted to just Rs 1.30 lakh crore, whereas the Centre has earned a revenue of Rs 24 lakh crore in excise duty.”

Cooperation Minister ST Somashekar, who got stuck in the traffic jam, said “Bullock carts aren’t allowed inside the city. This is just a drama the Congress is staging. They can raise the issue in the Assembly instead of causing inconvenience to citizens.”

Health Minister K Sudhakar too said the issue could have been raised in the assembly, “but Congress unnecessarily by organising the bullock cart protest is troubling animals and also common people by causing traffic jam. They could have rather come in bicycles.”

The Congress, at its recent legislature party meeting, to discuss the party’s strategy during the session, had decided to corner the government on issues of price rise, deteriorating law and order situation and distressing financial position of the state, among others.

This is the first session of the Karnataka legislature after Basavaraj Bommai took charge as the Chief Minister and his new cabinet assumed office, following the exit of state BJP strongman BS Yediyurappa.

On its first day, the assembly paid obituary references to 32 eminent personalities, including some former members, who died in the last six months, when the House was in recess, along with the victims of COVID-19 second wave and floods.

Karnataka Legislative Assembly Speaker Vishweshwar Hegde Kageri said “we have lost so many seniors, eminent personalities in the last six months. In the history of the assembly in 2006 the House had paid obituary (references) to 26 people together, but this is the first time we are doing it for more than 32 people. This is painful.”

As a mark of respect for those who passed away, the House observed two minutes silence, before it was adjourned for the day.

Posted on September 22, 2021 Author source below

Salman Khan’s ‘Bigg Boss 15’ is all set to hit the airwaves from October 2 on Colors channel. Ahead of the launch of the reality show, gossip mills are buzzing with the rumours that several popular celebs will participate in the new season. According to a report in SpotboyE, the likes of Karan Kundrra, Tejasswi […]

Posted on February 19, 2021 Author source below